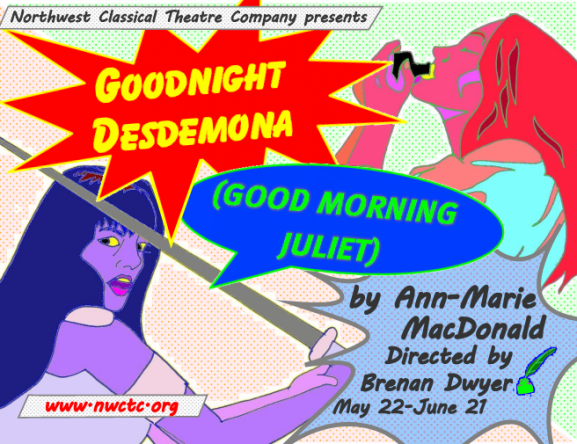 Northwest Classical Theatre Company concludes its seventeenth season withGoodnight Desdemona (Good Morning Juliet), an action-packed, hilarious homage to Shakespeare and the people who love his plays. This production will be the last for the company in its current format; moving forward NWCTC will no longer keep a resident acting company nor claim the Shoebox Theatre as its home.

In Goodnight Desdemona (Good Morning Juliet), Constance Ledbelly, a Shakespearean scholar, postulates that two of the Bard’s best-known tragedies, Othello and Romeo and Juliet, are based on comedic source material. Constance researches firsthand when she takes a tumble into her trashcan and lands in the worlds of the plays where her presence rapidly causes the plots and characters to change: Iago and war-like Desdemona team up, death-obsessed Juliet and bi-curious Romeo tire quickly of marriage, and Constance is tasked with finding the author of it all.

Join us for this adventurous production before we say goodnight to Northwest Classical Theatre Company as we know it, and stay tuned for more details on the rebirth and continuation of the company as we near the season’s end.

For tickets or more information go to: www.nwctc.org