On the Objects of RICHARD III

During the opening night celebratory toast between the cast, crew, and audiences for RICHARD III, NWCTC Artistic Director (and the man performing in the title role) Grant Turner mentioned—while describing the rather hectic production process—that I had designed “five times as many props as were actually seen on the stage.” He was exaggerating, of course,but really not by much.

Between director Barry Kyle’s creative methods and an unfortunately short rehearsal schedule, much of my “normal” preferred method of pre-planning, research, and execution of a design had to be ditched in favor of creating a design in tandem with the rehearsal, all on short notice and as fast as logistics could possibly allow. And it is not at all a stretch to say that the prop list changed nearly every day, with the new things being added and cut right up until two days before that opening night.

It was maddening and frustrating and stressful beyond belief. And yet, looking back on what type of show we have here and how we had to work, I’m not entirely certain that we could have done it any other way. After adding and then stripping away all of the excess object elements, we’re left with a brutally simple prop design which supports a vision of RICHARD III which is distinctly American and set in the cold, stark world of today.

Some of those objects are intentionally literal and with a specific label designed to represent our setting: a shopping bag from Target, an issue of the Wall Street Journal, a Radio Flyer tricycle, and a Farmer’s Almanac tell you exactly where you are and what you are looking at. Others, however, are more symbolic in nature and evoke a different sort of feeling all together; the crowned teddy bear, the battle fought with chains and machetes, a battle flag made of bloodied children’s clothing, and the river of white and red rose petals all refer to something a little bit more than their actual selves. While the contrasting ideas between the two do seem at odds, in this world they actually blend rather beautifully (or so I believe) and perform the primary task of any prop design—to support the actors and to help propel the story

While no one loves to see a prop they worked hard on cut from the final production, I actually prefer this version of the play’s prop design. What you end up seeing here is exactly what you need to see in order to live in this world that I and my fellow designers, the director, and the cast and crew have created to tell this story. Anything else would honestly only get in the way and create a distraction where it really isn’t needed or wanted. And since we’re here to tell a story, more than anything else, that’s the sort of design that I’m striving to create.

Teddy Bear for the young princes in the tower

Objects of war and faith 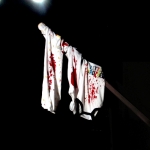